Where do I start ?? Firstly I apologise for the recent lack of blogging late last year - I guess I was blogged out!!!

First item for this year was the arrival, assembly and placement of a large barge which arrived in Bundaberg from Newcastle on three semi-trailers. The two barge halves were placed in the water by the ship-lift at the Port Marina, and then Stewart's largest crane assisted with the assembly and fitout of the barge.

After I left the site, the spud poles, the excavator and a drilling rig were loaded onto the barge, before it was pushed upstream by that small tender seen in this photo.

Interestingly, the destination for the barge was the area of the cane-ferry crsssing which is one of the narrowest sections of the Burnett River. 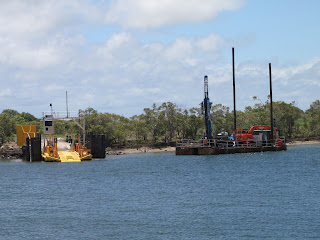 Now, the only information I could glean from the contractors was that they are testing the ground (taking core samples) for a possible new bridge.

Unanswered questions in my mind (at the time, I might add) -

1. Would this open up Bundaberg Port to potential coal exports?
2. Why build a bridge there when it would be more useful closer to the CBD, say just downstream from the sugar mill, where it could relieve some pressure from Quay Street?